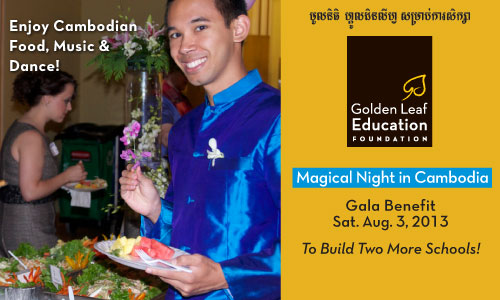 In three weeks, Golden Leaf Education Foundation (GLEF) will be having its 4th annual gala benefit, A Magical Night in Cambodia on Saturday, August 3rd, 2013 at the Ainsworth Event Center at the Scottish Rite in Portland, Oregon. Purchase tickets online today!

This event begins at 5:00 p.m. where guests at A Magical Night in Cambodia  will experience all the food, music and atmosphere that they’d find in the real place. There will be flavorful Cambodian cuisine from Mekong Bistro and local Cambodian-American chef and GLEF Project Lead Chhunny Sok. Local wines will be available to guests as they walk through the street market style kiosks and bid on unique silent auction items (auction also begins at 5:00 p.m.) brought from Cambodia especially for this special event. All proceeds go toward building schools and supporting education in Cambodia.

Our special guest speaker for the evening is Mr. Sichan Siv, Former U.S. Ambassador to the United Nations and international best selling author of Golden Bones, which tells his personal story of survival and success, taking readers from the Killing Fields of Cambodia to Capitol Hill in Washington D.C.

Guests will be entertained by the Cambodian Dance Troupe of Oregon, who will perform a classical Cambodian dance called Robam Makhor. This dance is usually performed for His Majesty at the royal banquet during the final day of the water festival. It is the symbol of water, earth, fire and wind, and derives from a story, during which gods and goddesses dance together and transform into an aquatic creature known as “dragon”, symbolizing bliss.

Concert Rock Violinist Aaron Meyer will also perform a special selection of songs. The evening will round out with our exciting live auction.

In November 2011, GLEF opened its first school, the Ang School, in Battambang, Cambodia. Construction of the second school, Koh Broteal Elementary in Choum Raisse Village in rural Cambodia, began in February 2013 and is to be completed this summer.

GLEF’s mission is to empower humanity by enhancing educational opportunities for children in need, in memory of genocide victims and in honor of survivors, golden leaves.

This entry was posted in Uncategorized. Bookmark the permalink.